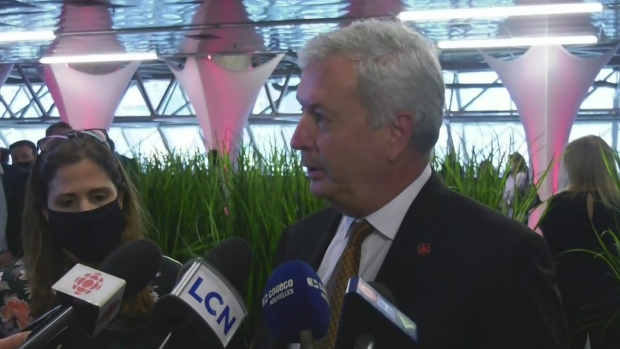 MONTREAL – The CEO of Air Canada has hired a private tutor to learn to speak and understand the French language, according to a letter written to employees of the company.

Michael Rousseau was criticized last week after telling reporters that he had “been able to live in Montreal without speaking French and I think that’s a testament to the city of Montreal.”

The CEO high in Ontario was forced to apologize the next day for the comment, which sparked a language storm in the province.

“I did not want in any way to disrespect Quebeckers and Francophones across the country. I apologize to those who were offended by my words,” he said.

In a letter written in French to Air Canada employees, Rousseau says he “regrets” the comments he made about his inability to speak or understand one of Canada’s official languages ​​while living in Quebec for 14 years.

“People who know me well know that these words do not reflect my values ​​and beliefs,” he said. “I take and accept personal criticism. However, the criticisms of our people and our practices hurt me deeply when you work so hard to serve our customers. “

Rousseau goes on to confirm that he has hired a private teacher and that his “learning French” has already started.

In addition, he says that the company’s official languages ​​practices will be reviewed and strengthened.

“I will personally oversee this process to ensure that all required actions are taken,” Rousseau said.

Following the language clashes, Canada’s Deputy Prime Minister Chrystia Freeland wrote a letter to Air Canada’s board of directors asking that Rousseau’s French skills be a determining factor in his annual performance review .

She also asked that mastery of the French language be an “important criterion” for professional promotion.

Vagn Sørensen, Chairman of the Board of Directors of Air Canada, responded to Freeland’s letter by stating: “We have discussed our concerns regarding these events with Mr. Rousseau and we are confident that he will do everything possible to achieve our collective objective of promoting the use of French within the company. “

Sørensen notes that the board has already released several changes, including:

The premier of Quebec, François Legault, spoke following the incident, saying he was indignant at the attitude of the CEO.

“I watched Mr. Rousseau’s video and I find it insulting. It makes me angry, his attitude, to say that he has been in Quebec for 14 years and that he has not needed to learn French. It’s indescribable, it shocks me. , “he said.” This shows a lack of respect towards the French-speaking employees of Air Canada. “

The company has a history of non-compliance with the Languages ​​Act, according to Canada’s Commissioner of Official Languages ​​Raymond Théberge.

“It starts at the top. The example is given at the top and then the message is given to the organization from the top, ”he said. “I think it is very useful for executives who head bilingual institutions or organizations to be able to address their employees, their clients and their stakeholders in both official languages.

He notes that he has received dozens of complaints about the incident.